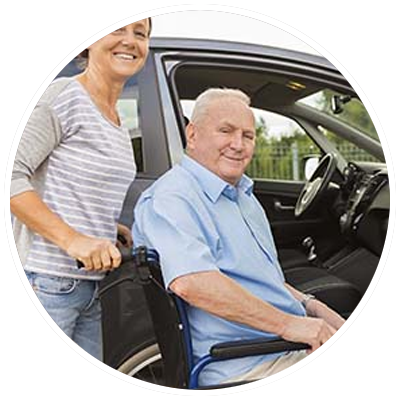 A wheelchair, alone, cannot keep men and women from accomplishing their heart's desire, because the human spirit is capable of transcending life's most debilitating tragedies; its power and potential cannot and should not be underestimated. In this infographic, AMS Vans celebrates the lives of famous disabled people who succeeded brilliantly from a wheelchair. We've chosen ten famous people who use a wheelchair and whose achievements have had a dramatic impact on the world to remind everyone that each of us, for better or worse and regardless of circumstances, sets our own limits in life. The illustration captures the highlights in the life of these individuals, but here are a few more interesting facts about them. Stephen Hawking Stellar theoretical physicist Stephen Hawking suffers from a motor neuron disease related to amyotrophic lateral sclerosis (ALS). From his wheelchair, he proved Einstein's theory of general relativity, developed a mathematical proof for black holes, redefined the Big Bang theory through math and science, and proved the universe has no boundaries. Hawking's paralysis, while almost complete, retains enough muscle-control to allow him to operate his wheelchair and other electronics by pressing a button with his right hand to operate a computer screen where he controls his wheelchair, doors and appliances in his house--and Hawking's book, A Brief History of Time, stayed on The Sunday Times best-sellers list for a record-breaking 237 weeks in Great Britain.

Franklin Delano Roosevelt President Franklin D. Roosevelt contracted polio at 39, losing the ability to walk on his own. He is the only person elected president of the United States more than twice--in fact, he was elected four times, and he did it all from a wheelchair he designed himself. He was president when the Japanese attacked Pearl Harbor and Hitler declared war on America, which prompted America's entry into World War II, and he helped lead the Allied forces to victory. FDR was the first president on television; since then, he been portrayed on stage and screen by Ralph Bellamy, Kenneth Branagh, Edward Herrmann, John Lithgow, Jason Robards, David Ogden Stiers, Robert Vaughn, Jon Voight, Christopher Plummer, and Bill Murray.

Christopher Reeve Famous for far more than his breakout role as Superman in four successful films, Christopher Reeve stayed in the spotlight as an actor and director after a horse-riding accident in 1995 resulted in a spinal cord injury and his quadriplegia. To operate his power wheelchair, Reeve used sip-and-puff technology to move and tilt the chair any way he chose. This method sends signals to a device using air pressure by "sipping" (inhaling) or "puffing" (exhaling) on a straw, tube or "wand." An onboard respirator and a tube delivering oxygen sustained his breathing. His experience motivated him to establish the Christopher and Dana Reeve Foundation, dedicated to curing spinal cord injury.

Frida Kahlo Despite contracting polio at age six and sustaining a broken spinal column at 18, Frida Kahlo became an internationally revered artist, most famous for her self-portraits, which include a painting of Kahlo in her wheelchair. Viewed by many as an icon of female creativity and a feminist icon, the politically active artist was portrayed in a 2002 film starring Salma Hayek.

Itzhak Perlman World-renowned violin virtuoso Itzhak Perlman wanted to enter Israel's Shulamit Conservatory at age three, but was not even big enough to hold the violin, so he taught himself how to play. When he was old enough to study, he entered the conservatory and gave his first recital at the age of 10 before moving to the United States, where he attended the Juilliard School. He was awarded the American National Medal of the Arts by the National Endowment of the Arts, and he received Kennedy Center Honors in 2003.

King Phillip II of Spain When his severe gout made walking too painful, King Phillip II used what might be the world's first wheelchair. He ruled Spain when it was the foremost Western European power, and he also ruled England as the husband of Mary I, until she died.

Nick Vujicic World-famous, Australian motivational speaker Nick Vijicic was born without arms and legs due to a rare disorder called tetra-amelia. He started his first company when he was 17, started public speaking at the age of 19, and starred in the 2009 short film The Butterfly Circus, which won several film festival awards.

Barbara Jordan A leader in the American civil rights movement, Barbara Jordan was the first African-American elected to the Texas Senate after reconstruction and the first southern black female elected to the U.S. House of Representatives. Diagnosed with multiple sclerosis (MS) shortly after, she continued to serve her state and spoke eloquently from her wheelchair. President Bill Clinton stated he wanted to nominate her for the United States Supreme Court, but by the time he could do so, Jordan's health problems prevented him from nominating her.

Jean Driscoll Rounding our our list of famous disabled people in wheelchairs is Jean Driscoll. Also born with spina bifida, she served as the Easter Seals poster child for Milwaukee County in 1976, and remains the first and only person to ever break the course and world record five times at the Boston Marathon. She was inducted into the Wheelchair Sports, USA Hall of Fame in 2002. These famous people all have something in common, and it isn't a wheelchair, nor is it being disabled. They followed their passion, believed in themselves, and they succeeded, as would anyone who does the same. Be inspired. Find your passion. And be an inspiration. Sources: